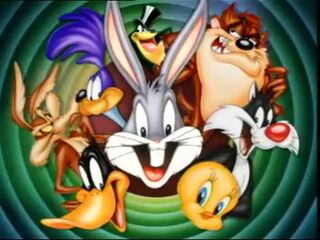 Welcome to WB Animated Universe Wiki
The wiki about Warner Brothers Animation that anyone can edit!
657 articles since June 2009!

The Sylvester and Tweety Mysteries

Pinky and the Brain

Contribute to this wiki

To write a new article, just enter the article title in the box below.

Not sure where to start?

Freakazoid! is an American animated television series, produced by Amblin Entertainment and Warner Bros. Animation that aired for two seasons from September 9, 1995 to June 1, 1997. Then, after cancellation, reruns aired on Cartoon Network until March 8, 2003. Bruce Timm, best known as a major principal of the DC animated universe, originally intended it to be a straightforward superhero action-adventure cartoon with comic overtones, but executive producer Steven Spielberg asked series producer/writer Tom Ruegger and the Animaniacs team to turn Freakazoid! into a flat-out comedy.

Retrieved from "https://wbau.fandom.com/wiki/WB_Animated_Universe_Wiki?oldid=9525"
Community content is available under CC-BY-SA unless otherwise noted.